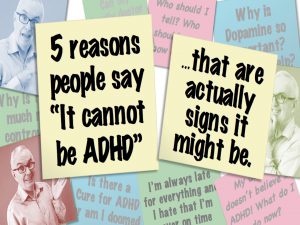 So many people ask me about the symptoms of ADHD. What are the signs of ADHD? What is ADHD? How does it show up?

Usually these folks admit they wondered if they might qualify, but then they cite reasons that they couldn’t have Attention Deficit Hyperactivity Disorder. To their surprise, their ‘Non-ADHD’ trait, ability, or explanation is a common sign they might have this mindset.

“My whole family is like this…” Ah, let me tell you about the strong genetic component. It’s highly heritable. “What? Oh…”

For a full transcript of this video scroll down.

Allright first of all, oh hi I’m Rick Green from TotallyADD.com. Now ADHD is well recognized among kids but it’s woefully under diagnosed among adults and here’s the problem, yes children struggle with lower self-esteem lower grades lost opportunities, far fewer friends, believe me I know been there done that, but among us ADHD adults the costs become more severe double triple quadruple the rate of car accidents, of being fired going bankrupt divorce hospital visits, addiction substance abuse depression. Anyway here are five common reasons that people offer as to why I can’t possibly have ADHD.

Don’t Have All The Symptoms of ADHD

#1 well I read a list of ADHD symptoms and I recognize some of them but a number of them didn’t apply to me at all.

In ‘Our Book – ADD Stole My Car Keys‘ we list 155 beliefs, behaviors misbehavior’s and even some strengths of people with ADHD. And nobody has them all, not even me.

#2 Well my whole family’s like this I’m just a chip off the old block we’re all like this.

Right that suggests it might be ADHD because ADHD is highly heritable it runs in families.  I’ve blogged about how there are over 20 suspect genes that have been identified and many of them overlap with other disorders.

#3 – I wasn’t hyperactive as a kid running around I went I was quiet.

Right did your doctor ask what you were like as a child or how long have these things been an issue for you? I have met so many people especially women who were misdiagnosed with depression and they might actually be struggling with depression because a lifetime of undiagnosed and untreated ADHD is depressing.

look , up to a third of the prison population is undiagnosed and untreated ADHD but a huge percentage of very successful entrepreneurs athletes entertainers first responders military personnel even hairdressers also qualify as having ADHD. Those are the five big reasons that I hear over and over again. So I’m all about getting people who are at this end of the spectrum people who are struggling in life but are totally unaware that it might be ADHD to consider that it might be ADHD. The reasons I can’t have ADHD might actually be classic signs that you do have this mindset, and if you do great let’s get the crappy parts handled and then we can play to your strengths. By the way there are a number of other reasons why people don’t want to look into ADHD for themselves or for a loved one I can talk about those in a follow-up video. I could talk about them not know I better not.