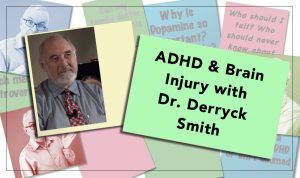 Can Traumatic Brain Injury Cause ADHD?

Have you had a traumatic brain injury (TBI)? ADHD expert, Dr. Derryck Smith explains that TBI is associated with developing mental conditions, including secondary ADHD.

For a full transcript of this video scroll down

Can ADHD Be Caused by Brain Injury

No I think ADHD can be caused genetically or by damage to the brain itself and one of the commonest ways that we see in kids is brain damaged from exposure to alcohol in utero. So most kids with fetal alcohol syndrome will also qualify for a diagnosis of ADHD. Unfortunately also have usually lower IQ and all kinds of other things but the the reason that that psychiatrists get involved with treating them as if we can improve the ADHD then you usually can improve the their general level of functioning.
Same thing with kids with autism they know they made they may not even have have the diagnosis of ADHD but they have a problem with attention and if you have an attentional problem then the treatments we use for ADHD are going to benefit that part of them and if they can pay attention better than they’re more likely to be able to use the limited skills they have because of the other condition they have.
Brain injury is is another one that I became interested in and I’ll tell you this story because it really taught me a lesson and that was you know I was seeing adults with ADHD and I’m quite thorough to the point where I bring in in their mothers and I’ve had something I had a 72 year old guy his 91 year old mother came in, and the mother had all his report cards! Unbelievable, and although he never had the diagnosis reading the report cards tells you the story you know this this guy had ADHD but the these other three guys came in I interviewed their mothers they never had it as a kid and this wasn’t supposed to happen I mean if you don’t have it as a kid you’re not supposed to have it as an adult so being a clinician they that they had it in cross section so I treated them and they got better. So I but I started scratching my head how can this possibly be they had is that all never had it as a kid? and then I started reading and then I that brain injury so I had one of the men who I was quite friendly with and I said Don did you ever have a brain injury? He said you know doc I was in the hospital for three months at one time. I said Don why didn’t you ever tell me? He said doc why didn’t you ask.
So the message there is if you don’t ask people they may not tell you so every time I interview a patient now for anything I always ask about brain injury, because I think it’s an important idea to cover. Particularly when you’re looking at adult ADHD. well he’d had a concussion he had a brain injury he he was in a car accident and he was in a coma for two weeks and had needed neurosurgery and so on so it was a a big time brain injury and the the general message is the worse the brain injury the higher the chance are that you’re going to have a psychiatric problem including ADHD as a result of the brain injury.
All three of them had brain injuries and there really would be no other explanation because you know what we’re teaching students is you know when you’re working with adults you have to determine whether they had it as a child because they didn’t have it as a child they’re not going to have it as an adult. Well that’s that’s true for the genetic part of the condition but it’s not true for the brain injury part of it of ADHD. Well so it’s mostly trauma encephalitis I mean the the original use of the medication the Benzedrine or as we know now the amphetamine class was by Bradley when he was treating kids who had wild behaviour following encephalitis an infection of their brain. So he started treating them with the with a dexedrine and the kids called them their
math pills.
That was you know 1935 1937 Charles Bradley. So this these medications that we’ve been using you know Benzedrine from the 30s and the methylphenidate from the 60s they’ve been around around for a long time and they generally have the the advantage of treating inattention. It’s a it’s a nonspecific kind of a treatment so you can’t for example you can’t take someone where you think they might have ADHD treat them with methylphenidate or dextroamphetamine they get better and say ergo oh they’ve got ADHD they got better. Everybody gets better with with the stimulant medication.
okay well because I answered this one for parents and families all the time. I said do you ever go to Starbucks? Yup I go to Starbucks all the time. Do you ever go in there what are the people doing in Starbucks? Well they’re sitting there they’re reading newspapers or they’re playing on their computer or they’re talking to their friends. Well you know what they’re drinking? You’re drinking a stimulant medication we call it coffee it’s full of caffeine which is a stimulant and it it stimulates a part of the brain that’s inhibitory I think is the way I explain it to people. So if you don’t become a wildly hyperactive on caffeine in reasonable doses if you get the wrong dose you can become wildly out of control but the reasonable dose people help them focus, get on with their work be more productive which is why employers like people going on coffee breaks because they come back more focused on on their their tasks.
For More Information about ADHD: