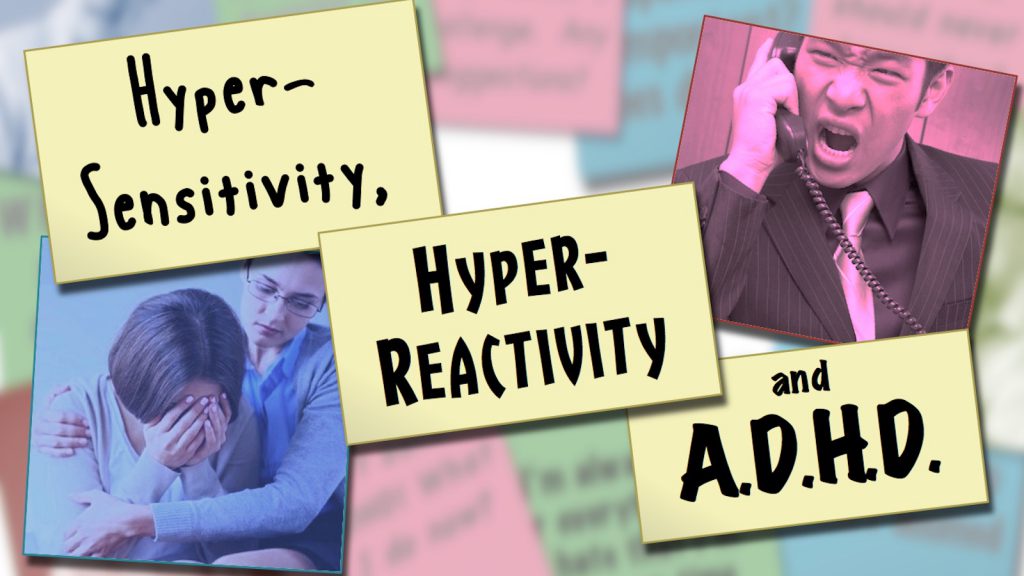 Have you heard of RSD? Rejection Sensitive Dysphoria?

In the TotallyADD Patron Chat Rooms these topics resonate strongly.

“They say I’m too touchy. Too sensitive. Overly emotional.”

In this video Dr. Kathleen Nadeau, author of many books on ADHD in women and teens, explores this Hyper-Reactivity that seems to be an almost universal challenge for her clients.

The whole idea of how emotions are expressed and expressed more intensely when one has ADHD is a multi-layered phenomenon and part of it is hugely influenced by gender roles. Even if we’re not considering ADHD we know that women are more prone to internalize their feelings, hide their feelings, not express them overtly, feel anxious, feel depressed, have low self-esteem. Males are more likely and may be even trained in some way to express their feelings externally, that it’s more masculine to get angry, to blame the problem on someone other than yourself.

So if you add that on top of ADHD we have people who are dealing with chronic frustration I mean that is the essence of living with ADHD is that big things and little things tend to go wrong all the time. We’re dealing with someone who by virtue of just having ADHD has a problem with impulse control, we’re also dealing with things that really aren’t clearly defined with the standard diagnostic categories that we have now, but I really believe that people with ADHD have a heightened sensitivity to all sorts of things, heightened environmental sensitivity to light, to sound, to tactile touch, and also a heightened sensitivity to verbal slights to irritations, to frustration.

So here you have a person dealing with this and having difficulty controlling their self-expression, what I often describe girls and later women with ADHD struggling with is being hyper reactive. I don’t mean hyper-reactive in a physical sense they’re not going around punching people in the nose, they’re hyper reactive in that they may get very excited, very hurt, very upset, very disappointed. I have sometimes jokingly said in my lectures that with many young girls who have less control over their emotional reactions that you can sort of put very in front of every emotion that they feel, and they certainly get very angry but that may be expressed differently, it’s more likely to be expressed in yelling, it’s more likely to be expressed for people that they feel very safe with i.e. their parents, their immediate family members.

What I find with males is that they are more prone to overt expressions of anger when they’re frustrated in a whole variety of situations that a male might be more prone to express it in terms of road rage, I’m late, I’m frustrated, that guy just cut me off, I’m furious, they may be more prone to get overtly angry at the office if someone is telling them what to do or criticizing them for something they’ve done, that men are more likely to be described by their spouses as having a very hot temper that they have to walk on eggs around them when they’re having a rough time because that’s how all the expression, the emotional expression comes out.

There are a lot of different things involved in managing anger when you have ADHD. I would not in any way say that people with ADHD are just like people who have an anger management problem, there are some people that go through life feeling angry almost a chip on the shoulder kind of attitude, I dare you and sort of blasting at anyone and everyone that comes across their path. This isn’t the time or place to go into all the complex reasons why they may be that way but that is not at all similar to what people are dealing with, with ADHD.

What Is The Upset Zone?

So often the explosion will occur in reaction to a very minor frustration and seem completely out of proportion, when it’s really a build-up that you could see coming for hours if you looked at it. I try to teach people to stay out of that danger zone, I advise people to always have a healthy protein bar with them so if they’re stuck in traffic, if they’ve got starving kids in the back seat, if they’re getting hungry, don’t let that become part of the mix that makes everyone start yelling at each other.

I worked with one man who learned to go to the public library on the way home after his awful commute, he learned that if he just stopped by the public library which was a few blocks from his house, he could sit there, he could read the paper for a few minutes which he wasn’t going to get to do the minute he walked in the door and his kids and wife were there, and just 10 or 15 minutes of reading and he could get back in his car and get home. We all need to learn those decompression techniques.

When I was the mother of a young daughter with ADHD I trained her from the age of two that mommy needs some quiet time, and quiet time was literally, it could be a five-minute break, but if I needed quiet time I could go lie down, I could close my eyes and she knew I would be back that she didn’t need to come chase after me, but that I needed quiet time and she learned that very well and would sometimes go around asking other adults if they needed some quiet time too, I’m sure that they did.

There’s a lot of self-management that we need to learn self-awareness and a lot of our explosion points are very predictable, sleep deprivation is a huge issue. Adults with ADHD are prone to have difficulty getting to sleep at night, it’s something that’s called delayed sleep phase syndrome. Adults with ADHD are natural night owls and delayed sleep phase syndrome is just a fancy term for being a natural-born night owl, and many adults with ADHD manage that by arranging for work and lives that allow them to sleep till 10 in the morning and they’re fine but most of us don’t have that luxury. So lots of adults with ADHD are running on empty they are chronically sleep deprived, that impacts the prefrontal lobes of the brain almost like giving yourself a double dose of ADHD and you’re going to be very prone to be irritable, to lose your temper, to become more anxious, to become moody if you’re chronically sleep deprived.