What if it's More Than Just ADHD!?! 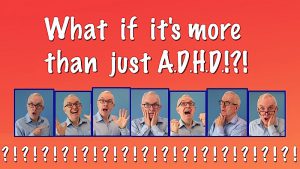 While the rest of us are practicing social distancing and isolating ourselves and our loved ones, the fact is that our ADHD loves company, and often brings with it a posse of secondary disorders. Uninvited guests who create all kinds of fun challenges for diagnosing and treatment. And by ‘fun’ I mean ‘Arrrghh!’

Some folks who have attention deficit hyperactivity disorder may be shy, loners, avoiding others, but that’s not the case with ADHD itself, oh no this disorder loves company, fellow travelers who bring a host of other mental health problems, challenges and risks.

In fact by adulthood 70% of adults have had a second diagnosis and 40% of adults have had three or more. For example a particularly manly man, like me, can have ADHD with a touch of Asperger’s and have endured bouts of anxiety and depression. What is the correct medical term for these tagalongs? Comorbidities.

Dr. Anthony Rostain: “At the time that the first papers came out on comorbidity we didn’t like the word comorbidity, it sounded too morbid.”

Let’s look at why having ADHD puts us at risk for these secondary disorders, these uninvited guests, these cruel consorts.

ADHD: The Problem of Secondary Disorders

Dr. Anthony Rostain: “We started the first ADHD program in Philadelphia in 1987 and about for the first five or six years I saw every single patient that came through, I was like the psychiatric consultant, but little by little I individuated into the role of seeing the ones who had problems with ticks and Tourette’s, the ones who were highly anxious, the ones who seemed explosive and had real rages and mood disorders, and then the ones who had the learning disabilities that were really impairing their ability to relate socially.”

When I spoke with Dr. Stephen Kurtz he was at New York University’s ADHD clinic, he was exploring innovative strategies for children with ADHD as well as doing a lot of diagnosing, which was of course made more difficult by this cast of crippling characters called comorbidities.

Dr. Stephen Kurtz: “When folks come in for an evaluation they ask us does my child have ADHD or not? What they don’t know is that if they’re coming here for an evaluation there’s about 50 probability that the child has another diagnosis as well, and they’re not used to thinking in those terms.”

Dr. Anthony Rostain: “Almost anybody and everybody I see now has at least has ADHD with something else.”

Dr. Steven Kurtz: “So if a child has ADHD, if we make a good diagnosis they have a 40% likelihood of also having ODD, a nasty kissing cousin of Oppositional Defiant Disorder, and that’s separate from the ADHD.”

Dr. Steven Kurtz: “Kids who break rules they’re defiant, they say no more often than other kids, and that really complicates or flavors the issues.”

Try diagnosing a child who is against… well… everything. Then there are the co-morbid disorders we commonly associate with adults, because by adulthood a life of undiagnosed or even diagnosed ADHD can leave you sad, frustrated, and anxious about what’s going to go wrong next.

So the challenge with multiple diagnosis is not just which of these buddies in bad times came first, but it’s also did having one lead to the other or are they separate issues? and which do you deal with first? I mean that’s something that complicates even the simplest treatment plan.

Dr. Annick Vincent: “If you have ADHD in your kid, that increases your risk of being depressed, for sure it increases your risk of having a low self-esteem, you may have more anxiety than the general population. There are kids who have ADHD who don’t struggle in school but most of the kids with ADHD also have learning problems, not maybe LD that is learning disorder but at least learning problems.

Then that kid when he was younger was having more accidents than the others, you know, accidents severe enough that that kid would go to the emergency room. Then that kid will drive a car, so guess what happens? Increases the risk of accidents.”

Sound familiar? Some of those may.

Dr. Annick Vincent: “So I don’t want to say that everyone who has ADHD will go through all that for sure, but it increases the risk, so this is why as a clinician we think it’s really important to detect ADHD early and treat ADHD early, and treatment includes educating, what it is having ADHD? How to cope with the symptoms, and if you need medication what would be the best medication for you?”

It can also be a case where what looks like two disorders might actually be a third disorder, is ADHD with anxiety a sign of something else?

You know if you show me the children you think have ADHD, Oppositional Defiant Disorder and anxiety, show me somebody you think has all three and I can convince you he is not oppositional. He does not get up in the morning to make his parents day miserable, he is adamant that it must be the way he sees it, then you may be looking at autistic spectrum disorder. So you know I often see Asperger’s kids get diagnosed with Oppositional Defiant Disorder, ADHD, but they’re not truly the same bug, and it’s interesting because I believe that some of the characteristics of ADHD that are talked about are actually Asperger issues.

No I don’t think really most kids with ADHD have that big of a of a social difficulty, they may be so hyper for some friends that they can’t handle it, but it’s really the Asperger who doesn’t know how to enter the group, stands back.”

Loner? Awkward? When I spoke to Dr. Aull what he was describing felt very familiar, the fact that I have a model railroad, that I have a degree in science, a tendency not to look people in the eye when I’m talking away, finding small talk difficult, I started wondering.

The sceptic might ask does any of this really matter? Aren’t they just labels? Well yes and no, I mean they are considered specific and separate disorders for a reason, like a problem with your car’s muffler demands different repairs than say a burned-out headlight.

Dr. Anthony Rostain: “and I’ve been impressed with the fact that the co-morbidities are the things that impose the greatest challenges to your life success.”

Unlike ADHD some mental health issues present themselves clearly, dramatically, it’s obvious, epilepsy comes to mind, or there are phobias. In fact the person who has an overwhelming fear of something will probably be the first to tell you “oh I hate spiders.” So sometimes it’s easy to connect the dots and see how it shows up in daily life.

With the passing of the years untreated ADHD can give rise to anxiety and depression, that seems obvious. Other disorders like Tourette’s they’re there from your earliest days and with so many comorbidities it’s small wonder the symptoms start to blur and overlap and blend, they blur together, where does one end and the next one begin?

What is certain is that the complexity of our brains and the complexity of the modern world that we have to navigate means that a symptom may or may not show up in obvious behaviour, it’s often subtle or indirect, or even insidious.