Is It Good To Make Lists?

I’ve been writing about all those ‘helpful’ lists that seem to be everywhere.

These are the To Do lists, with lofty goals, but no directions, no practical steps, no immediate actions, no ideas or practices to get back on track when you get stuck or derailed.

You might as well take the 10 Commandments, update the language and claim you’ve discovered the secret to personal happiness.

Or list the 7 deadly sins and title it, “7 Fun Things Happy People Somehow Avoid. Number 4 Will Make You Hate Yourself More.”

We can be very clever.  But if I was as clever as I like to think I am, I would’ve figured out how to be far more productive in far less time.

I took a course with coach Linda Walker to enhance productivity.  Here is a simple example from the course that illustrates this dilemma of using strategies designed for most people, people who do not have ADHD, or what Linda calls the ‘neuro-typicals’.  [I love that term!]

Most books will tell you that when you’re working, the best way to increase your productivity and stamina is to take frequent breaks.

And yet ADHD or ADD folks are most productive when they are hyper–focused. Call it what you will, “in the zone”, “locked in”, “laser focused”, “finally able to pay attention,” or “didn’t get up and do the dishes, a load of laundry, and paint the bedroom to avoid work.”

Once we are locked in, the brain fixated, many of us can go for hours without interruption.  In fact any interruptions are almost physically painful.

Non-ADHD folks don’t quite get how hard it is to get out of ‘the zone.’  So I’ll explain.

“Imagine being at your own wedding and just as the minister asks, ‘Do you promise to love, cherish, respect…’ suddenly, four people at the back of the church start shouting at you about last night’s hockey game, how Houdini pulled off his escapes, and what exactly a cheese curd is.

And you hate hockey.  But love cheese curds.” You’d be stressed, annoyed, and angry about the intrusive interruption.

The point is, we can focus.  But not always for long.  Or at the right time.  Or on the right thing.

I’ll leave it you to write down 157 examples, and create your own article, “Things I Did When I Should Have Been Doing My Taxes.”

In the course with Linda Walker, each of us mapped out our energy levels over the course of the day, and the week.

The goal was to figure out when our own optimal ‘focus time’ is, and when we’re probably too tired to take on a task.  When I’m toast. Fried. Fried Toast… Mmmm, waffles!  Sorry.

I was surprised to find out when I’m most focused.  And Linda encouraged me to avoid taking breaks at those times, unless I needed one.

The result? I no longer set a timer to go off every 45 minutes, as I was advised to do in several books on productivity and time management, and had tried many times with limited success.

(Oh, did the alarm go off? An hour ago? Wow! I reallllly need to pee.)

Instead, when I was going full speed, I kept going.  It’s what I used to do, instinctively, before I started reading magazines, books, and online articles that listed 19 Steps To Powerful Productivity written for, and by, ‘neuro–typicals’.

Experiment, try new strategies, keep what works and let go of stuff that doesn’t work, after you’ve given it a fair shake.

And if something you try seems particularly useless, or difficult, try doing the exact opposite. You’ve probably felt kind of opposite for much of your life, so why not run with it.

Because you are anything but neuro-typical. And I love that about you.

13 Replies to “Everyone Conveniently Overlooks The Details – Part 2” 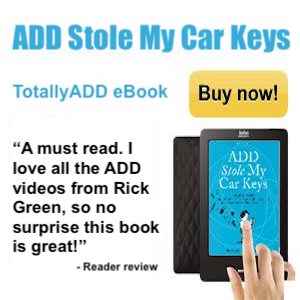