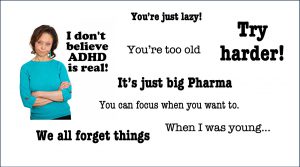 Is it just me, or are more and more people confusing their beliefs with facts.  Perhaps people have always mistaken their opinions for the truth.  I don’t know.

What I do know, for sure, is the universal challenge you face after getting an ADHD diagnosis is whether or not you should tell anyone about it.

Who you should take into your confidence?

Who probably doesn’t need to know? And who definitely should never find out?

In fact, who really needs to know? Because, let me warn you, as the police warn everyone, ‘Anything you say may be used against you in a court of law.’

How To Answer “ADHD Isn’t Real”

Unlike in a court of law, the people in your life will be the judge and jury.  They won’t have all the facts. They won’t see the evidence.  The only testimony they’ll hear is the voice in their head.

The only expert testimony they will hear is whatever they happen to have heard about ADHD.  Unlike a court of law, they will rely on rumor, personal prejudice, and they’ll have previous convictions they ‘know’ are true.

And they almost certainly won’t be a jury of your peers.  They won’t have Attention Deficit Hyperactivity Disorder.  Most people don’t. So they have no idea.

Many will instantly rush to a verdict and pronounce you guilty of fraud, of being lazy, looking for excuses, evading work, and the worst crime of all, ‘Lacking Willpower in the First Degree.’

The punishment?  A life sentence of mockery and disdain for you, and for ADHD.

Punished for your symptoms. 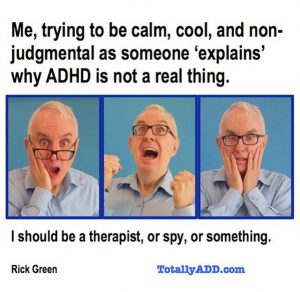 ‘It’s Always Something With You…’

How do you defend yourself from people who don’t believe in ADHD, or laugh at the possibility you have it? Or worse, people who use the knowledge to ruin your career?

It’s worse when it’s your child who suffers from this stigma.

It’s something we explore in detail in what may be my favorite video, Facing The World. The film lays out several simple strategies that allow you to instantly turn the tables when you’re confronted by hostility.

They work. I know.

You go from the defensive to the offensive, in a sweet, lovely, and abrupt moment.

The secret is to avoid making the other person look bad. (Which is not easy.)

The Cost of Victory

Oh, yes, I recall the guilty pleasure of taking a blowhard down a peg once I had the diagnosis.

Naively, I talk about this amazing mid-life revelation, and how it was changing everything.  I was eager to share my good news.

Someone would roll their eyes, ‘I don’t believe in ADHD,’ and imply I’d bought into a medical scam.

There was no such thing.  It was too much sugar.  Or food dye.  Or laziness.  Naturally everyone in earshot turned to watch me try and squirm out of this.

At first I was stunned.  Gradually I learned to stay calm and explain,‘Well, a lot of people don’t believe.  But 4,000 scientific studies probably triumph your belief. ’

Or, ‘Well, if you don’t believe in ADHD, how do you feel about Epilepsy?  Do you think that’s just spoiled kids who shake and twitch to get people’s attention?  Or lazy parents who refuse to discipline every child’s natural inclination to throw seizures whenever they feel like it?’

That was a particularly nasty one.

Feel free to use it if you want to end some friendships and look like a jerk.

That’ll Show Them!… Or So I Thought

The pleasure of demolishing a loudmouth comes with a cost.  It actually makes the other person have to defend their belief even more, because I’ve given them no way out except humiliation.

As every first-year Psychology student learns, the more your argue with people, the more they have to defend their irrational beliefs.

Look at the state of the world.  Read the news.  Watch debates.  Or, if you have the stomach for it, read the comments on most Facebook posts.

If humiliating people and pointing out how foolish they are actually changed people’s minds, the world would be a very different place. 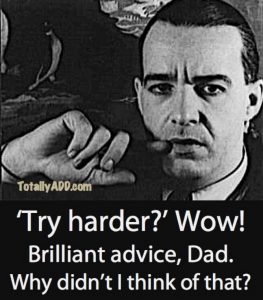 It Makes It Worse

By the way, demolishing someone may shut them up.  They may not argue back.  Many even nodded and give a little ‘Hmm…’ which I mistook for, ‘Rick makes an interesting point. Food for thought. I should really learn more.’

What were they actually thinking?

‘Wow, I must have hit the nail on the head.  Rick clearly can’t stand the truth.  Look at him, going on and on. Like my sister-in-law when I told her fairies aren’t real.’

The Secret Weapon is Understanding

No one likes being taken down a peg.  Or made to look foolish.  Especially in front of witnesses.

Yes, I know, I know!  That person didn’t mind trying to make you wrong and embarrassing you in front of other people.  But did their dismissal of your ADHD in any way change your mind?

Or did it just make you lose your cool?

Because staying cool is crucial.  Lose your cool, your dignity, your poise, and you’ve lost the battle.

My friends don’t know much about ADHD

How do you avoid getting into a conflict you can’t win?

See it as an opportunity.   A chance to enlighten people.  It’s actually kind of perfect.

We hate that there is so much ignorance and misunderstanding and stigma about ADHD, right?  Now, here’s the chance to actually take it on and transform ignorance into understanding.

Someone says something dismissive.  Let it pass right through you.

Get that they are only repeating what they’ve heard.

Consider that there may even be real concerns that big Pharmaceutical companies are putting profits before people. (It’s been known to happen.)

Understand that yes, sometimes people are misdiagnosed.  Or some teachers are too quick to label kids.  Not many, perhaps only a few, but still…

Catch yourself before you erupt, or you collapse inward, crushed, mortified. 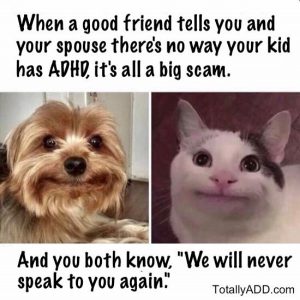 A Slap In The Face

The first few times I was confronted by shocking ignorance or righteous hostility, I was totally gob-smacked.  (I love that word!)

Has it happened to you?  Isn’t it shocking when someone spouts mythical, outdated, nonsense that they are adamant is the truth.

You should know I’m pretty talkative.  But the first few times a naysayer said, ‘Nay, nay!’ to me, I completely shut down.  Like I’d be slapped in the face.  I was struck dumb. (And that’s not like.)

Eventually I would come up with wicked rebuttal. But by then it was 3:00 in the morning, I was home in bed, still stewing.

I would come up with a dozens of wickedly clever things I should have used to eviscerate that know-it-all. (Not realizing that my devastatingly witty retorts would have made them defensive, more entrenched, and far more hostile.)

Days later I’d still be re-writing the conversation and these fantasy dialogues always ended with me triumphant and the smart ass totally humiliated, or, in my more benevolent imaginings they would be humbled, offering a heartfelt apology, asking if there was anything they could do to help.

It’s a skill I’d honed over thirty years of writing for television and radio. But in at 3:00 in the morning there’s no audience, so it’s a waste of creativity

But I knew from my own experience, and from what people are sharing in our community about their Emotional Journey, facing skeptics is a hot topic.

If you or a loved one are dealing with dismissal and hostility—from friends, family, colleagues, or classmates—check out Facing The World.

You’ll discover there is a better way to deal with ignorance and stigma. True, it’s not as juicy and dramatic as demolishing an enemy.

But it’s the demolishing that turns them into an enemy. And you don’t need another foe. You’re busy enough struggling with your ADHD.

There’s a great article in ADDITUDE Magazine about how to deal with people who don’t understand ADHD, or dismiss it, or deny you have it.

It’s something we explore in detail in our latest video, Facing The World.

Now the article offers some sage advice. It also offers a few hilarious sarcastic things you can say, such as, “Gosh, it must be nice to be smarter than thousands of doctors, scientists, and psychologists.”

Oh, the guilty pleasure of taking a blowhard down a peg.

Alas, the pleasure comes with a cost.

Because no one likes being taken down a peg.

Or made wrong. Or embarrassed.

Even though they don’t mind making you wrong. Or embarrassing you.

The first few times I was confronted by hostility or ignorance, I was totally gob-smacked. (I love that word!)  As I have said here in the past, it’s shocking when someone is spouting mythical, outdated, nonsense that they believe is the truth.

It’s only later, on the drive home, that I would think up a wicked rebuttal that would have, “Showed them!”

Or if we can’t think of a brilliant riposte, we fantasize about the uninformed loudmouth being crushed by a falling piano, lying there, pinned under a Steinway, begging for our help…

And we lean over them and coo, “Piano?  What piano?  I don’t believe in Pianos. They’re just something invented by record companies to sell albums.”

And now, through their own pain, they realize how hurtful they’ve been, and they apologize for their ignorance and beg for our forgiveness.

Which we grant them, because ADDers are often generous and kind and empathetic and quick to forgive.

Now because the perception that ADHD is a ‘myth’ is less than it was even a few years ago, we might think it’s not a big issue.

Some of the ADHD specialists say they rarely encounter it. Which makes sense, because people who scorn the idea of ADHD avoid seeing specialists.

And yes, for some ADD adults, who have supportive people around them, resistance is never a biggie.

But I knew from my own experience, and from what people are sharing in the Forums about their Emotional Journey, facing skeptics is a hot topic.

DENIAL CAN DERAIL YOU FROM MOVING FORWARD

One of the most common questions I get when I’m doing live events is, “How do I deal with people who dismiss it?”

I drew up a list of a dozen nasty statements, then I wrote some rather clever rebuttals, and trimmed it down to the five nastiest ones.

And I blogged about it too.

And now, a few years later, and a bit wiser I’ve learned that sarcasm will silence someone. But it never really changes their mind.

Humiliation is the least effective way to get someone to open up to a new idea.

It’s a result of something called Cognitive Dissonance.

The answer? I have some fun demonstrating a number of clever techniques in “Facing The World.”

But to start questions. Ask them for facts. Figures. Names.

“Really? By how much? What is the rate of diagnosis? And what should it be?”

There’s much more in ‘Facing The World’, which I won’t go into here. But my experience is that you can turn disbelievers into allies. It’s incredible.

But questions are a great place to start. Ask and then wait. The silence is deafening. –>