What I Wish I Knew About ADHD When I Was Younger

Imagine if you could travel back through time and speak to your younger self, before your ADHD was diagnosed, back when you were struggling against this insidious opponent. An opponent you didn’t know was there. A struggle that you didn’t realize you were in. What if someone had told you exactly what had been undermining your best efforts? What would you want to know? Here’s what I want to tell my younger self about ADHD, life, success, strengths, and murder hornets.

Take our short Do I Have ADD? Quiz Read Yoga: Deep Breathing for the Mind and Body Read Mindful Meditating? You’re Joking… Right?!

Advice To My Younger Self

Welcome to ADHD: If Only I’d Known Sooner – Part Two. In part one I talked about the fact that we almost all go through that if only I’d known sooner phase, especially if we get a diagnosis later in life and the later it is in life the more we can be prone to if only I’d known sooner, if only. So what I suggested was you actually write out the letter of what you would have wanted the younger you to know at whatever age, I’m going to write and I have written what I would like me to have known 50 years ago when I was in high school the head school back then was at the Socrates and the Coliseum.

All right so here we go… Hello Rick yeah it’s Rick I’m calling from the future, from your future well it’s our future, it’s my present yeah I have good news, you make it to 67 years of age, I know you were worried you weren’t going to make it, yeah it’s true, when you get here prepare for some surprises, you still have a model railroad, I know, so keep at it, you have two kids, one of each, you love them more than you ever thought possible, it’s amazing. You’re remarried to a kind caring woman who basically makes you glow, you’re still working if you want to call it work. I know you have no idea what you’re going to do with your life, don’t worry, at my age I still don’t know but something’s going to come up. Your career path is going to look a bit like this, but that’s okay. 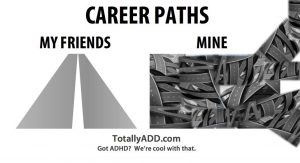 I’m calling because I want you to be prepared, your life’s going to be a bit of an unexpected roller coaster ride. Why? Well in a couple of years around 1975 doctors are going to come up with a diagnosis which will evolve into Attention Deficit Hyperactivity Disorder – ADHD, that’s all you need to know. The previous name actually was minimal brain dysfunction.

25 years after that you’re going to discover that you have this mindset, it’s not a disease, it’s not an illness, it’s really how you came into the world. It’s highly heritable, you’ll learn about it and as you realize you’ll be able to say this is me and this is dad yeah and his dad pom-pom.

There are 18 symptoms, they are… you know what never mind just ask Mom for your report cards, she did save them, you’ll find that out later but just read them and read the teacher’s comments, especially the ones from Miss Dawson, there’s your ADHD right there.

The reason I’m calling is you want to get it managed, you want to get it handled otherwise it’s going to wreak havoc with your finances, with your friendships, with your self-esteem. So here’s the thing, you are not stupid, you’re not weird… well actually you are, but in a good way, yeah and Ricky you’re not lazy, you’ve been working as hard as you can. What you do well, your future is not going to be what’s taught in school, yeah I know it’s great to read and write and do math and know about the world but it’s the things that you’re doing after school, making the comedy films, the modelling, being funny that actually is going to be your future, the stuff that comes so easily that’s where your future and your fortune lies.

ADHD is why you’re so good at doing some odd things, and I know you wish you could do things that other people could do, those other people wish they could do some of the things that you can do, trust me, actually go to some of your high school reunions and you’ll see what I mean. You should you work on maintaining your friendships that’s really important they don’t just happen. Play to your strengths, remember Dad teaching you magic, how quickly you learned, how much, you still love it, you’re still gonna love it when you get to this point, and how frustrated you were by juggling, unicycling, calculus, don’t worry about those things, save your money. If something is fun and interesting to you and easy to do pursue it, because it’s easy to you, not to everybody else, that’s huge.

Say no to some things, don’t over commit, trust your feelings, trust your gut feelings about certain people. If you can find a doctor who understands ADHD, great, that may not be for a while you know adult ADHD wasn’t recognized until around the 1989 1990s in that area there. Also, try an ADHD medication that can replace the six cans of caffeinated cola that you’re drinking every day, which reminds me, take better care of your teeth, you will not regret that. I know you hate flossing… floss!

We don’t smoke we don’t drink we don’t do drugs and yes almost all our friends do, I hate to tell you this but some of them are not going to make it because of that, yeah you can probably figure out who, but here’s the thing ADHD medication is a medication, and speaking of medication stop taking tetracycline for your acne, just cut out dairy

You know how much you hate exercise, do it anyway, try yoga and practice listening, active listening, it’s not a thing yet… it’s coming along, but basically just notice how your mind jumps around and keep trying to pause and come back and actually listen to people, and here’s another thought, turn off the TV now and then and do things, and try mindful meditation it has an amazing impact on people with ADHD.

Don’t share this diagnosis with everyone because Mom is not going to get it and Dad won’t be… just a lot of people are not going to get it, and even now here in the future a lot of people still don’t get it, they’re still doctors who don’t get it, just trust me you have this fairly rare and unique mindset and you’ll be drawn to people who actually have this disorder plus the anxiety part of that is the ADHD.

I can tell you that all kinds of stuff is going to happen in the world and actually you’ll handle it, you’ll actually be good in a crisis, oh experiment with organizers I have one on my phone, on my, just experiment with get a paper organizer, big calendar, something like that, we find that works really well, or you will find out that works really well. Get someone else to handle your finances, get an agent, and okay spoiler alert you get into show biz, yeah I know.

Other advice, eat more vegetables, don’t fret over y2k or killer bees or murder hornets, oh and a hot tip around December 1980 you’re gonna buy some shares okay rewrite this down buy some shares a little company called Apple out in California, you make sure you do that the minute they go on the stock exchange, Apple.. no they don’t make apples they, you’ll see, Apple just remember Apple.

All right I should go oh and around the year 2018, 2019, start a company that makes masks, masks that people can wear yeah do it before the end of 2019, all right. Enjoy the ride, don’t worry so much stuff tends to work out, bye.

So in writing all that out I actually had several epiphanies for myself, one being that my future lay is in the things not that I did in school but the things I did after school, making little comedy films, having a model railroad and now I actually get paid by people to make model railroads, I know it’s weird. Who knew? It’s a dream come true for me.

Obviously I can’t really go back and tell myself what I’d like to tell myself, however I was able to tell my son what was happening and it changed his life path in so many ways, so many ways he’s doing so much better than I was, and in fact in doing this exercise you may find that you’re actually doing much better than you thought and you’ll cut yourself some slack because as we used to say on the Red Green Show, which for him is in the future, we’re all in this together