Make Things Work For You

Six years ago I was out of shape, didn’t own a bike and did not particularly mind that I didn’t.

Ten weeks later I was sweating through a six-day, 386 mile bike rally. Actually, since it was from Toronto to Montreal, I should say 622 kilometers.

I promised to share the four strategies I used to accomplish this.

They are strategies I’ve used elsewhere in my life to master my ADHD on projects as big as launching this website and as small as doing this month’s paperwork. Oh, who am I kidding. I never get paperwork done. Ava does.

One strategy that had me manage the bike rally, as I mentioned in my previous blog, was breaking the training down into small chunks.

Can I do one small chunk…

Here is this week’s secret.  It’s one we talk about in our live workshops. I call it… “BEND THE WORLD TO YOU.”

Once I’d committed to doing the rally, I started training. But I had to use a mountain bike with ancient knobby tires. Even adjusting the seat didn’t hide the fact that it was a girl’s bike.

If you’re not familiar with Canadian geography the mountains are out west and up north.

So grinding around residential streets on Ava’s old mountain bike was like running the Indy 500 in a pickup truck: Same number of wheels. But wrong vehicle for the job.

So I borrowed my son’s bike, which was better, but still no cigar. The bell was broken, but the rusting gears squeaked so pedestrians could hear me coming.

Clearly I needed to buy a proper bike.

The training for the rally included classes on how to change flat tires, fix chains, and so on. We gathered at a bike store after closing hours. There were probably 30 riders. All younger than me.

Ava listened carefully and took notes. I looked at all the shiny things; checking in now and then to see if the instructor was saying anything interesting.

During a bathroom break, the store owner told the lecturer, “My buddy has biked across Canada, coast to coast, three times. Last time he rode on a recumbent. He said he’d never do it any other way.” 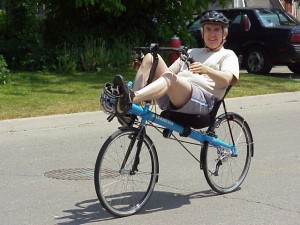 I love my recumbent bike

Why I Chose a Recumbent Bike

The first thing I notice is the seat.

Not a padded testicle crusher, but a chair, like a chaise lounge!

If you fall the metal sides of the seat take the impact. The handles are up high. Like a steering wheel.

No stress on the wrists from leaning over handlebars and holding your torso up. You sit back.

No neck strain from staring down at the road and cranking your head up to see where you’re going.

Your feet hang up in front of you. From the front you look more like a bullet. Much lower wind resistance. I was told all of the world bicycle speed records have been set on recumbents.

The store owner said, “If you were designing bikes from scratch, this is what they’d look like. Efficient. Comfortable. Aerodynamic.” I thought, heck, I’m starting from scratch. I want one!

The downside? It’s expensive. And it’s tippier to ride… until you get used to it.  But I know how to ride a unicycle and the recumbent has twice as many wheels. Best part of all? Ava was totally supportive.

So I came back the next afternoon, took it for a spin, giggled my head off, and bought it.

Sure, it was unusual.

As I zipped by on training rides people would either laugh and point or stare, gobsmacked, and shout, “That’s awesome!!!”

So yes, the bike cost extra. It’s weird. But so what? It was also a pain to load into Ava’s RAV4 when we headed north for training rides. But we did it.

What amazes me is that the rally has been run for a decade and I’m told I am still the only recumbent bike to enter.

I don’t understand why.

It’s waaaaaay easier and waaaaaaay more comfortable.  But people wouldn’t even want to try it. They’d shrug and say, “I dunno, it looks weird.”  It looks weird?  Hey, buddy, so do bruised, squashed testicles!

The point is, with ADHD you’re going to probably need to do some things differently, use different tools, or try different tactics.

If you need 8 sets of keys cause you can never find them, so what? Who cares. Big deal.  And if friends tease you about it, just laugh along. Or, maybe get better friends.

I love my recumbent. During the rally, after every break, we’d climb back on our bikes. Everyone else winced and groaned in pain. Me? I laid back into my ‘Lazy-Boy-Recliner’ laughed, and zoomed away.

Up next, Getting In Shape